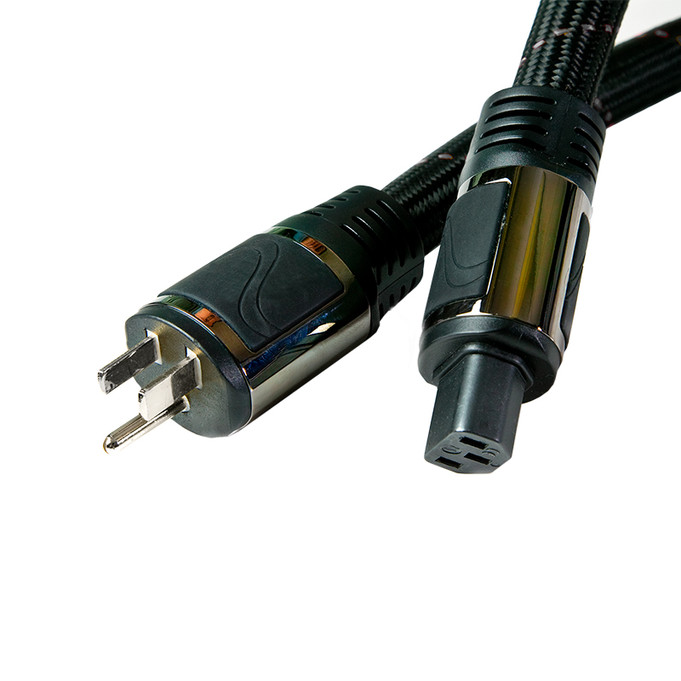 The PerfectWave AC12 is the best sounding power cable we’ve made in the last decade.  The AC12 is an 8 gauge cable constructed with pure PCOCC copper in multiple gauges and shapes.  Inside the AC12 are three hollow PCOCC conductors for the treble regions, one massive PCOCC rectangular conductor for the midrange and multiple gauges of PCOCC bundled together for the bass.  Equipment powered with an AC12 enjoy a significant improvement in sound quality over any cable we’ve tried.

The PerfectWave AC12 is the finest power cable we’ve made in the last decade, setting a new standard for high-end aftermarket power cables from PS Audio.

The low noise, high-speed design of the AC12 is based on 5 patents and years of listening and engineering and we believe it will bring new levels of refined beauty, power and spacious performance to high-end systems that use it.

AC power is a critical element in any high-performance audio/video system. Delivering that power to your equipment, without loss, is the job of the AC power cable.

A bit of history

In early 2000 we introduced the Lab Cable power cord.  The Lab Cable was one of the first aftermarket high-end power cables produced and it helped ignite a revolution in AC power interest that continues through today.

The Lab Cable was a major improvement over the stock power cable supplied with the equipment.  The main benefits of the Lab Cable are still embodied in today’s high-end cables: significant shielding from outside noise, internal geometries that reduce complex load interactions, heavier wire gauge to reduce power drops and the use of superior conducting materials.

It’s all in the design and construction

A stock power cable is something manufacturers purchase in large volumes from the lowest cost vendors and include in their products as a courtesy.  These power cables will always be adequate in terms of power delivery but rarely designed to take advantage of all the performance values the equipment is capable of.

When choosing a power cable for connected equipment it is important to select a model with adequate shielding, proper materials and well designed connectors that are up to the task at hand.

The PS Audio PerfectWave AC12 represents exactly the type of power delivery system you need for any high-end audio or video equipment.

The PerfectWave AC12 represents our crowning achievement in the art of power cable construction practiced over the last decade.

The AC12 is an 8 gauge pure PCOCC cable constructed in multiple gauges and shapes.  Inside the AC12 are three hollow PCOCC conductors for the treble regions, one massive PCOCC rectangular conductor for the midrange and multiple gauges of PCOCC bundled together for the bass.  The results of these design decisions is something extraordinary to experience.

Use the AC12 in your most demanding audio applications: between the wall or Power Plant and your power amplifier, preamplifier, DAC or phono preamplifier.  Once connected via the AC12 you’ll most likely notice that the soundstage opens up in ways you didn’t realize your system was capable of.  It’s all there, and with the AC12 you get every bit of sound possible.

The design of the AC12

The performance goals for the AC12 focus on building a musically balanced cable, specifically targeting the three main tonal areas of music: bass, midrange and treble.

The balance between these three core areas is achieved by a combination of conductor shape, materials and geometry.  The exact formulation for each of the models is designed by careful listening and evaluation engineering, but based on some of the principals contained in several patents, chief among them 6,969,805 of the US patent office and licensed to PS Audio by the inventor.

The patent describes an elegant solution to managing tonal characteristics of the reproduced audio by leveraging the properties of shaped conductors; specifically square for midrange and a thin flat conductor for the treble.

Shielding a cable utilizes conductors around the entire cable to pickup any electrical noise from within and from outside the cable.  This is important because the equipment  generates noise on the power line which is injurious to surrounding equipment as well as keeping extraneous noise from getting into the power cable.  Good shielding is a requirement for any power cable in a high-end system.

The AC12 employs a quad shield for extraordinarily low noise performance.  This unusually high level of shielding raises the performance of connected equipment to perfection levels.

One of the critical considerations in a high-performance power cable is the grade of copper.  The conductivity of the conductors plays a significant role in extracting the best sound out of your system through better power cable construction.  In the AC12 we use a pure, single crystal copper known as PCOCC.

Copper typically has millions of crystals connected together to form the strand we use to deliver power.  Between each crystal structure is a small semiconductor barrier that the flow of electrons must overcome to deliver current at the other end.

PCOCC solves this issue by creating a single crystal conductor.

As early as 2003 we realized that even with the best conductor technology in the world would benefit from an improved connector.

The PerfectWave AC12 connectors are built out of a solid block of high copper content brass, and then polished to remove any surface irregularities. The surface of each is then gold plated to prevent any oxidation over time.

Traditional off-the-shelf stock power cords use a tightened steel screw to hold the conductor against the prong or are simply squeezed together.   This practice is prone to oxidation and corrosion as well as loss of connectivity.

The PerfectWave AC12 instead employs welding to fuse the conductor to the machined prong and  high silver content solder in in a final technique that creates the perfect bond of welding and soldering.

There’s a lot of controversy and misinformation surrounding the subject of AC power quality, power delivery systems and the importance of the power cable in a high-end system.  Power cables matter if gaining all that’s possible with any piece of equipment matters – and most high-end system owners would perhaps agree this is a goal worth pursuing.

One of the first questions people typically ask is why the last 6 feet of power cable matters when typically there are hundreds of feet of power delivery wires feeding the AC to the wall socket in the first place.  The answer is deceptively simple and can be addressed in two parts: the equipment is not at the end of the delivery system and most of the noise that degrades performance is generated by the equipment itself.

Your equipment is not at the end

It is a common misconception that a piece of equipment is at the end of the power delivery chain when, in fact, it is actually in the middle of that chain.

AC power has two conductors (ignoring the ground wire which is only for noise and safety) and power flows in a loop between the two conductors – your equipment sitting right in the middle of that loop.  So the unit is not at the end of the chain, but rather in the middle and this is the area where the AC power is subjected to high levels of noise – and that noise can degrade the audio or video quality significantly.

The source of noise

A stock power cable is perhaps the worst thing you can use to connect your equipment as these are neither protected internally or externally and their construction does not support the reduction of complex interactions and noise generated by the equipment.

To get the most out of your system you should consider replacing all your stock power cables with well designed low noise versions.  Doing so will help the performance of your system immeasurably and, depending on the type of power cable you wind up with, can contribute to significantly lower system noise, less glare riding on the music and better micro and macro dynamics.